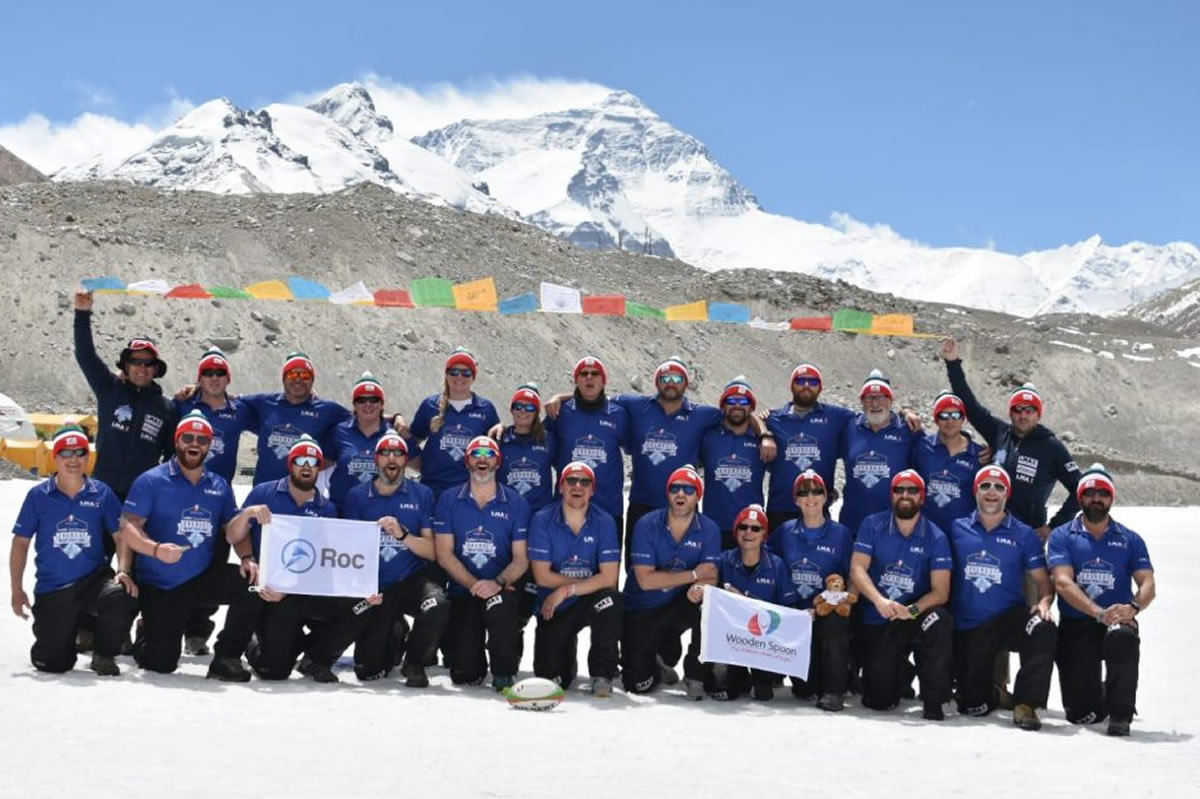 Roc Technologies is proud to announce their participation in the completed LMAX Exchange Everest Rugby Challenge, in support of Wooden Spoon Charity. Represented by CEO Matt Franklin, the team raised over £300,000 for disadvantaged and disabled children in the UK and broke two Guinness World Records.

Roc Technologies Chief Executive Matt Franklin was part of the group of intrepid adventurers who broke two world records for the highest game of Rugby and Touch Rugby ever played – 6,331m above sea level. Taking place on the Rongbuk Glacier near Mount Everest’s Advanced Base Camp on Tuesday 30th April at 10:15 am,  the game formed part of the LMAX Exchange Everest Rugby Challenge.

The LMAX Exchange Everest Rugby Challenge has already raised over £300,000 in donations. These funds will be used to support charitable children’s projects around the UK and Ireland.

The group was comprised of former international rugby players, leading business executives and a diverse range of people from the rugby community. Among the participants were international rugby legends Lee Mears (England) and Shane Williams (Wales), who boast almost 140 international caps between them. Other star players included Ollie Phillips, a former star of the international Rugby Sevens circuit, and Tamara Taylor, a legend of the women’s game having represented England 115 times.

Battling altitude sickness, the symptoms of which include severe headaches, lack of sleep and loss of appetite, the group spent two weeks acclimatising and slowly advancing up the mountain. Having successfully played the highest ever game of touch rugby last week, at Everest Base Camp (5,119 m), the Challengers progressed to Advanced Base Camp (6,200 m). From here they trekked two hours to the Rongbuk Glacier, setting up a full-sized rugby pitch, in accordance with Guinness World Record specifications.

Facing severe shortage of breath, with oxygen levels estimated at around 40% at Advanced Base Camp, the group then battled hard in a fiercely-contested game of full contact Rugby Sevens. Here Team Phillips took on Team Williams under the watchful eye of Tamara Taylor, who assumed the role of referee.

Team Captain, Shane Williams said, “In arguably the world’s most spectacular setting for a rugby match but also the most inhospitable conditions, the game was incredibly tough. If you ran during the match it took 10 minutes to recover. That said, everyone put in 100% and there was some great rugby played. I can’t praise the team enough.”

Match referee, Tamara Taylor, added, “The time spent at this altitude has taken it’s toll on all of us but the group summoned a second wind to play the game. The energy has been tremendous, with everyone rallying together to spur each other on and, even though we’re exhausted, we’re buzzing at the achievement. After days of having to deal with one of the world’s harshest environments, we’re looking forward to coming down off the mountain and enjoying the feeling of having broken two world records and raising a lot of money for very worthwhile causes.”

Roc CEO Matt Franklin commented, “It was fantastic to be able to get involved in this great challenge for such a worthy cause and I was humbled by the support I received from friends, colleagues and family. The challenge was much harder than I expected. The combination of the altitude, extreme temperatures and lack of sleep really takes its toll on the body after a while and I found it very difficult. Playing rugby at that altitude leaves you totally breathless but the team spirit really helped us all to muster up the energy and desire to achieve this amazing outcome.”

The general public are still able to get behind the challenge by visiting everestrugby.org.uk and through the use of #everestrugby on social media. Through this campaign Wooden Spoon hopes to motivate people to conquer their own Everest, by climbing their own Everest to fundraise for children and young people with a disability or facing disadvantage.

Sarah Webb, CEO of Wooden Spoon, commented, “We are very pleased to be partnering with LMAX Exchange for this exciting and important event. We have been blown away by the challengers’ dedication, grit and pure determination.  The challenge has been extremely tough, brutal at times, but the team have pulled together and broken two World Records in the most extreme of conditions, as well as raising over £300,000 for children with disabilities and facing disadvantage across the UK & Ireland. The LMAX Exchange Everest Rugby Challenge also highlights the wide range of beneficiaries we support who are attempting to overcome their own challenges. We really hope that the achievements on Mount Everest can inspire people in all walks of life, from the children and their families who will benefit from the funds raised, to those moved to achieve something, whether it’s running 5 km or climbing a (smaller) mountain, or even learning a new life skill.”

The LMAX Exchange Everest Rugby Challenge is sponsored by LMAX Exchange Group, a leading UK-based financial technology company that operates multiple electronic trading exchanges. David Mercer, CEO of LMAX Exchange Group, commented, “It is fantastic to hear that the team of rugby challengers has completed two games at the highest altitude ever, breaking two world records. Our goal in business is all about redefining standards and challenging perceptions of what is possible, so we have profound respect and admiration for the teams who have accomplished feats that professional climbers would be proud of, while also promoting the power of rugby at such high altitude and for a great cause. LMAX Exchange is proud to be supporting the teams in this challenge, raising money to help to transform the lives of disabled and disadvantaged children around the UK. We are committed to driving positive change not only in the financial services space, but also in the world around us through actively supporting social change initiatives.”

Visit everestrugby.org.uk to see how you can get involved and Climb Your Own Everest.  Donations can be made via the same link or by texting EVEREST5 to 70085 to donate £5.